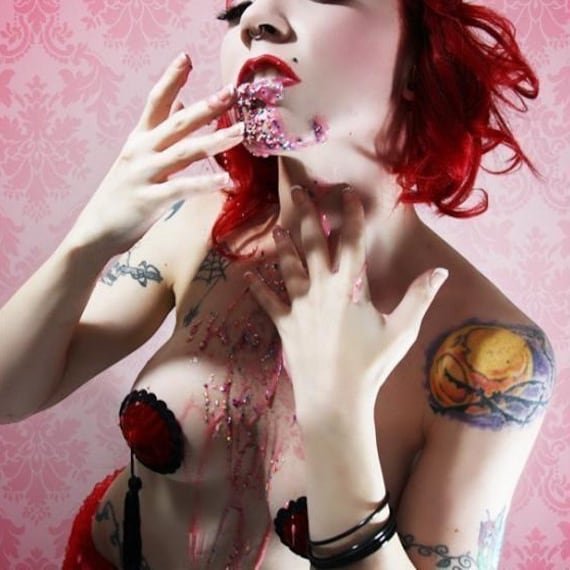 co-written with Artie, Moo, and Temp.

Artie:  Bandit had already begun to be doubtful of this whole ordeal, now worried for her health and well-being. Though – if anything involved putting a collar on her, how would it have been good to begin with? She only held onto the small sliver of hope that it was loose enough to take off, though tight enough to not notice.. Though as they came to the table, Bandit’s eyes met that of her old master’s. Fear did not come to her, instead she felt anger and disgust. “Hope is all you have, after all.” This was a slight jab at his hope of getting his princess love that she had stolen from him.. this gave her pride, as it showed in her straightened posture and straight face. “I should have expected this. Seems you can’t get away from old loves, hmm?” The female would then sneer right back, before looking at him and spitting at his feet. She held no honor for this man – to her, he was the scum of the Earth. Anyone who claimed rights over another was absolute trash.. and thus, he was.

The ring did help her hangover, her head much clearer now.. perhaps it prevented drunkness as well? “Alright, let me go, I’ll be on my way out, soon. Clearly, this buffoon doesn’t know what he’s doing.” And so, Bandit would roll her eyes at Raul, turning to Eva and shaking herself from the other blonde’s grip. The thief would merely scoff again, displeased as she turned away from the warlock. Was he really worth her eyes’ time?

Eva had a feeling that her presence would be made clear in good time, and sure enough it was. It took very little time for Raul to approach her and Bandit. “Swapped out the gift wrap for a quick and personal delivery.” There was actually a bow tie that she was going to put on Bandits head, but she looked crappy enough as it is. Walking around like someones precious pet wasn’t going to do her or Eva any good, so she decided against it. The words that the two were sharing meant nothing to her, but she kept her eyes on them both regardless. Obviously they had some sort of history, though she did not wish to know it. Her job was done. She nudged Bandit towards Raul when she turned to face her, keeping her Makarov pointed at her while she did so. “Job’s done then, me and my men will come by some other time…something important just came up.” The rest of the money that she was owed would likely be delivered to her in time. Raul didn’t seem like a fool, so crossing her would likely not happen. With her work done and her statement made, she holstered her weapon and turned to walk away. The crowd blocking her path was rather irritating, but she wouldn’t make a scene. Unless she was needed for something else she would now leave the building.

Moo:  Narcissa jumped from her seat quickly, nodding excitedly at the Doctor. Not a moment was wasted while she turned on her heels to the buffet table, where she would pile her plate with a variety of food. None of it would be wasted, so long as it tasted good! Employees stood about the table, describing the different delicacies. The monster didn’t care. She stepped around them and grabbed a handful of whatever, ignoring the tongs and looks that were shot her way. She was smiling happily, completely oblivious. “Food, food, food~!” she chanted while she practically skipped back to the table.
Narcissa’s plate was set on the table and she sat down, immediately picking up a particular meat to bite into. “..YUM!” She hummed merrily to herself while she chewed, pausing to swallow and take another bite. The plate would certainly be cleaned in no time.

Razorbackwriter:  “Job’s done then, me and my men will come by some other time…something important just came up.” The leader of the Anarchy Division announced, after giving Bandit a good little nudge not to try anything stupid. Raul seemed to be amused by Bandit’s crass spirit, and her spitting only left a slight smear on the floor at his feet. His luminous green eyes did catch sight of the collar around Bandit’s neck and this only made his smile widen. “Indeed it is. By all means, do return at your leisure when you are able to. I look forward to ensuring the entertainment and comfort to you and your men.”The Warlock bowed politely before Eva, then turned his attentions back to the wicked Bandit, who was causing the diamond dogs to snicker and point at her from their places at the table. Already they could see that the night was going to be even more lively than it had been before. The Warlock snapped his fingers sharply, which caused the collar around Bandit’s neck to tighten to a point where she would not be able to get her fingers between her flesh and the leather. That done, the Warlock then approached the girl, his masculine scent mixed with that of the cigar smoke and cologne worn.

“I see you are sober, my little Bandit. How amusing. When I found you you were…how shall we say; well and truly wasted. You barely struggled as I took you. Sexual pursuits in a dark alley has a certain hedonistic charm to it, don’t you think?”

The Warlock walked around her slowly, then using his index finger he used it to press to her flesh and make her turn to view another table in the House of Red lust. A gentleman was seated opposite another red headed beauty and he was feeding her chocolate covered strawberries. She slowly licked away at the chocolate, teasing it with her tongue as the skirt of the table moved with the obvious signs that they were doing more than playing footsies. The man…looked familiar. Very familiar. In fact….he was the man of her dreams.

“What I liked was when you let me drink your nectar in the brothel. Though…you called me a different name. What was it? He tapped his lip as it would become clear that the man at the table looked a lot like Riley. Raul had probed Bandit’s mind enough to know what he looked like…and the collar squirted a small spray of mist towards Bandit’s face to help her see…..what the Warlock did. A mist that helped to trick the mind of the unwilling. The couple at the table were now leaning towards each other, kissing and petting whilst the music swirled and became more decadent in the foreground.

“Oh that’s right. Riley…Riley was his name. You remember…don’t you, my little bandit.”

The Warlock leaned into where Bandit stood, as the couple went to stand, and the courtesan was leading “Riley” off to one of the more private rooms. Riley looked back at Bandit and then he tossed down something on the table, before following the beauty off to the seclusion of a suite.

Watching this and Bandit’s reaction if it was how he would have suspected, the Warlock chuckled and said. “What are you waiting for? Are you going to flee the club….or see your long…lost…love?” The Warlock crossed his arms and waited for her answer.

Never before had Wilhelm seen Narcissa enjoy herself as much as she appeared to over helping herself to a large serving of different foods from the buffet. It brought a smile to his face, and as he reached for his glass of wine, he raised it to toast his team. “To many nights like this one.”

At this the band struck up a fine tune. Violins playing sharply, and Wilhelm recognized the tune. The Masochism Tango. Grinning, he rose from his seat and walked around it, slipping off his dinner jacket and setting it over the back of the chair. The Good doctor reached for Roxanne’s hand and went to lead her onto the floor, which parted to allow the couple to dance.

Meanwhile Igor had finished his hot pocket, and then felt a light tap on his hump. It was Trisha Von Ticka….one of the doctor’s rivals. She sneered at the small hunchback, and in a voice that sounded rather manly, she said.

“WE DANCE!” Igor squeaked as he was ripped out of his chair and led to another part of the floor, where he was practically smothered by Trisha’s hairy bosom as she enveloped him in her arms and began to do her own version of the tango. All one could see was the flailing of Igor’s arm and the prominence of his hump sticking out behind him.