Back at Hell’s Kitchen, the Doctor gives his creation a test.

Co-written with Temp and Moo.

Temp:  Roxanne was glad that the creature took a liking to her, even if it was only because of her glorious boobies. Narcissa seemed to be just as enthusiastic as she was, but Igor and The Doctor were a different case. The fact that the creature turned into a docile behemoth at the sight of a pair of breasts wasn’t what they had hoped for. “I’m sorry Doctor, I hope it’s not my fault…or my boobs fault rather.” It probably had nothing to do with anything she did, and rather just something to do with the brain inside the creature. Regardless of the reason behind this kind of behavior, it would still possibly carry some kind of negative effect.

Moo:  Narcissa moved closer to the monster casually, then spun to stand beside Roxanne. “Well they are almost falling out of your dress,” she commented with a wide grin. Of course she hadn’t meant any offense by the comment; Narcissa rarely thought before she spoke. “Mine stay hidden in the lab coat!” She turned Roxanne by the shoulders and began to tug at the opening in the dress, pulling them together. The struggle was rather visible, as the nurse’s breasts knocked together and the dress was still a good inch from meeting itself. “We have to get a better dress!” Narcissa exclaimed with wide eyes. She let go of the dress and watched Roxanne’s breasts bounce back in place, jiggling before settling. Another noise of satisfaction came from the monster before the female held up a finger with an idea. “Gauze! You can be like me!”
Shuffling to a nearby desk where she kept her own supply of the stuff, she sifted through it and brought some back. With Roxanne’s big boobies covered, maybe the monster would return its focus. Narcissa held up the gauze and lifted her brows with a grin. “Yes?”

Razorbackwriter:  Narcissa was definitely the only one that could come up with a wise solution with how to cover up Roxanne’s breasts to stop the slobbering giant of a creation. The good Doctor grinned as he watched Narcissa approach Roxanne with the gauze which would do the trick, but also earn Roxanne a new nickname. Igor kept a close lazy eye on the creation who was transfixed by the bodacious Roxanne. If it weren’t for the fact that this was a serious matter, all would be laughing at the situation before them.

“Wrap her up tighter than King Tut!” Wilhelm ordered, as he turned to face his creation – who had drool running down his chin. “You! You and I need to talk.”

The creation slowly turned his head and leered down at the good Doctor, who was rubbing his chin and staring back up at the super soldier. How could he turn this fascination with the female breast to his advantage in combat? Needless to say, it was a real pickle. Special optical lenses? A hypnotic programme while he slept. to tell him he didn’t fancy bosoms.

“Rrrrrrrrr.” The creature snarled at the Doctor, while the sound of Roxanne being mummified went on in the background. The Doctor had heard of taping down bosoms before….but this was ridiculous. Igor was starting to doubt that it was just the boobs that had the creature so fixated. “What if its not just her boobs, Master?”

This had the Doctor wondering. He then turned to ask Roxanne a huge favor. “Roxanne? I want you to lead the creature out to the demonstration room and see if you can get him to attack one of our test subjects.” What they had in the demonstration room was an orc that they often used as fighting partners for various experiments. He was about 6 foot and a mean bastard. If Roxanne could order the creature to fight and not have it continue to stare at her breasts….they may be on to something.

Temp:  Roxanne blinked rapidly in confusion as she looked between all her friends. Just what was going on with this creation? She looked down at her full chest as Narcissa tried to pull her outfit closer together. There was simply no defying the luscious melons reality defying proportions, at least by ordinary means. Soon enough, Narcissa gave up on trying to fix her outfit and ran off. What the girl was up to she didn’t know, but she had a feeling she was gonna find out soon enough. Eventually Narcissa returned with a ton of gauze, which she promptly began wrapping her in. She couldn’t help but giggle as she was slowly mummified to an extent. Once her chest was wrapped up and no longer exposed, she looked over at the Doctor and tilted her head at his request. There was no refusing him, not that she ever would to begin with. “Right away Doctor!” She had done some work with the demonstration room before, so she was rather familiar with the procedure. The only real reason it was risky this time was because this creature was…unusual. Regardless, she skipped over to the creature and placed both her hands onto one of his. She quickly tugged him along with her into the previously mentioned room, and then stood between the creature and the Orc.“Okay…umm…could you please fight this guy?” She pointed at the Orc, which she mouthed ‘sorry’ towards, before turning her attention back to the creature. Was it going to obey her ‘command’?

Moo:  Narcissa merrily circled around Roxanne several, several times at the prompting of the Good Doctor. “Aye-aye, Doc!” she nearly sang out before she giggled. Appreciation for her idea was not neglected, for she delightfully hummed in her movements. The gauze would cover every bit of the nurse’s oddly large breasts. “You’re starting to look like me!” she commented while taping the last bit together. The frankenteinian monster took a step back and clapped and swiped her hands together, as if ridding them of dust before planting them on her hips. She stood there with the biggest grin covering the lower half of her face, it was almost as ridiculous as Roxanne’s boobs. Rather proud of her work, she nodded her head in delight; one simple, swift motion as her eyes gleamed. With the request from Wilhelm, Narcissa was no longer needed. Yet she was happy to stand by and watch as the nurse pulled the giant monstrosity into the next room. However, she would gladly situate herself in front of the door of said room, awaiting with genuine excitement and curiosity to see what the the doctor’s glorious creation would do next.

Razorbackwriter:  The demonstration room was more like a small arena, or bull fighting pit. It allowed the Doctor and his paying guests to see his work in action or in this case allow Narcissa, Igor and Roxanne to witness the colossal giant live up to the expectations of all. The fact that the creature had taken a shine to Roxanne had been unexpected, and hopefully if the Doctor’s thoughts on the matter were accurate, this demonstration may prove fruitful….or deadly for the hapless orc. Wilhelm offered his hand to Narcissa to lead her up to the viewing platform, with Igor to close the iron grate that would keep the orc from escaping. Roxanne was fantastic, leading the giant into the stone pit and then giving the order…in a nice way.

“Okay…umm…could you please fight this guy?” 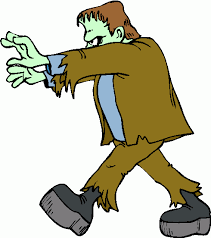 The creation smiled at her in a goofy way, before slowly turning his head towards his opponent. The green orc took one look at the giant and his jaw dropped open. The giant, who wanted to do EXACTLY what Roxanne asked, raised both fists and then pummeled his chest like a silver back gorilla, before roaring loudly at the orc. What happened next…well, it was comical to say the least. The orc dropped his battle axe and started to run in the opposite direction as the giant took off – each foot fall causing an earth quake like shuddering to the arena. Around….and around the pair went, with the orc even running up to the iron gate that Igor had shut and pulling on it helplessly. Of course, the giant was right behind him and grabbed him by the neck and pulled him away from the gate. A startled looking Igor chewed his lip as the pounding began. The giant smashed his fist into the orc’s head over and over till blood was seeping out of his nose…and his ears. Teeth were flying in all directions as the orc screamed for mercy. But just when you thought the giant had done enough damage, he then ripped the orc’s head clear off his shoulders. Blood spewed from the gaping hole in the orc’s neck as the giant held it aloft and roared loudly in triumph.

The Doctor was flabbergasted. Igor was stunned to silence.

Finally, the Doctor spoke. “I’d say that was a good test result.” He started to chuckle as the Giant offered the head of the orc to Roxanne like it was a bunch of flowers.