Boy, did Kat know how to pick a place. You could literally taste the testosterone as you walked in the front door. Wall to wall muscle and beef cake. Fighters of all sizes and shapes. From dwarves to Giants and orcs. Many were enjoying drinks, betting on the upcoming fights, or admiring the hostesses, that went from table to table ensuring that the customer’s every need was serviced. It was actually rare for female fighters to make an appearance, which was when the place really erupted. A few of the regulars spotted Kat off the bat, and the loud sound of wolf whistles and cat calls began. Typical. Ruled by their prick dicks and not enough blood to the brain. Kat sashayed in, her hips swinging like a pendulum – hypnotic and sensual as fuck. She knew how to draw attention, but the real draw card was coming in behind her.

The Princess of Wrath. A few men got instant raging boners just from the sight of the red vixen in her leather cat suit like fight gear. She was armed, sexy and down right dangerous.

“Hello boys. Brought my new Mistress out to play. Meow.”

A few whispered, and there was much elbow nudging along with winking. It was easy to see that a few of them were already having lusty thoughts about the pair. A few probably would pay a lot to see the Princess and her cat in a pool of jello, or swatting each other with pillows whilst on a long greasy pole. All to titillate, sure – but the Kat had other ideas. The reason they were there was so that the Princess could learn to take control of her fire powers. To regain her soul and above all, to kick someone’s dick into the dirt.

The bar manager, a short statured irish dwarf came hobbling over. He used a emerald tipped cane for support and with an eye patch on his left eyes, he used his shining right one to observe the pair.

“Who have you dragged in my club, Kat?” Oh he knew the feline well, but had never met royalty before. Really, he’d shit a brick if he knew who she was. Did the Princess want to be incognito? Kat chewed her bottom lip and wound her tail around the bar manager’s throat in a sensual manner. “My Mistress. We want your biggest and baddest boof head to turn into cat food.” She giggled as she wiggled and shot her Mistress a wink.

Rock happened to be a mountain of a man, who didn’t look to have any brains to speak of. Kat’s eyes slowly went up till she could see the fat neck and then the triple chins. What a boof head.

“Grrrrrr.” He didn’t like the kitty one bit, cause she was such wicked looking thing. Kat pouted at him, and then turned her head shyly towards the bar manager. Kat was trying not to laugh. The guy’s painted face and shocking hairdo was too much. Had he fallen from an 80’s time machine and landed in hell?

“Oh sorry, I figured people would call you Pebbles due to the size of your nuts.”

What would Sayaka say? Those fiery gold eyes seemed to go right back to their icy selves as the Princess followed Kat into the club. Sure enough, the place reeked of testosterone for those of the higher senses, especially for females; Sayaka didn’t care for it, and she actually had to vie for a straight face so that her toes and face didn’t curl up from the stench. She kept her left hand tightly gripping the sheath of her sword, her right hand tensed in such a way that it wasn’t noticeable to the idiots surrounding them, but to Kat it would have been, that she could draw the weapon in an instant without warning. An old habit acquired by years upon years of training.

She was aware of the lustful stares which followed her frame, and she ignored the fact of the whispers; she wasn’t a fool, she had the brain needed to imagine what they could have been discussing, and her eyes weren’t so bad that she couldn’t perceive the erections within the men’s pants. Hmph.. fools all of them, though more than one gave an audible gulp of fear once her icy stare had been turned on them. The very way she held herself and the icy look in those burning golden orbs said it all: she could cut their dicks and balls from their bodies in an instant and walk away without any remorse. Sayaka stayed silent for the most part during the conversation with the owner, till the beef-head decided to show up.

“…Hmph. I don’t think his balls are the only thing that’s small my dear. Hmm… I have a better idea.”

Sayaka gave a small smirk as she drew her sword without a word, giving several men the impression she was insane and about to try and kill the guy, but that was a ruse as the very moment her sword was stabbed into the ground with a clang, her smirk widened into a small, but twisted grin as she began to pull on the power of her flames slowly. It was the same grin that she’d had in the throne room, but unlike before she was in control.

Oh Sayaka was definitely toying with the owner and the brute, oh she was having some fun with this. Not only was she insulting the brute, but she was also placating the owner while aiming for his temper as well. It was like she was slowly becoming a different person, far more . . . conniving. Several of the men that had been eyeing her figure through her clothing were beginning to laugh, but others who were on the smarter side of things could tell that she was serious and were going wide-eyed in shock, while others still could almost see the sinister aura that was beginning to emit itself from her frame which only made them gulp visibly while move several feet further away.

Sayaka moved with a soft rustle, not losing her smile as she waited for his response, that grin gleaming while her aura slowly enveloped her while she pulled more and more on the flames, feeling her power rising, her Demonic Aura pushing into her while her flames leaked their power into her. What would be their response?

This was the moment that Katrina had been waiting for. Her Mistress didn’t let her down when she showed that she was more than ready to get into training. The fight club patrons were not aware that this was all good practice in learning how to control the curse. By having the thick as a Brick “Rock” as the crash test dummy. As much as Katrina would have loved to get a chance to tag her Mistress, she knew when to put up her paws and let it be a one on one competition. A little shrug from the cat woman’s shoulders showed that she wasn’t miffed about missing out on scratching Rock’s eyes out.

“Guess you’re not going to get a little pussy tonight, Pebbles.” She gave the wrestler a pat on his chest and then grimaced, cause his skin was soaked in baby oil. Kat smeared her hand on the fight club owner, before dancing off to the bar, and climbing up on the top of it, so she could get a much better view of the show.

Sayaka drew her sword in a fluid motion and this brought gasps and some applause from the mostly male audience. Her weapon was pretty impressive, and while the Rock was more of a hands on fighter, he tried not to be intimidated by her actions. He snorted loudly through his large nostrils, getting a bit of snot on the back of the fight club manager’s head.

A huge cheer erupted from the bar, and Katrina was already dancing up and down – swinging her tail as she watched on with a sinful grin. That was some wager, and she knew that the manager could barely knock back that amount of coin. It was more than he made in a week.

“You’re on, Wench.” The dwarf said, pointing a gnarly finger at her, before stepping back and allowing the Rock full access at the Princess. Another cheer and then money started changing hands in earnest, while the Rock started to flex and roll his shoulders. He even went as far as to crack his neck, then give his budgie smugglers a good tug. Yes, he was wearing gold wrestler speedos. For such a big man, he didn’t look to be packing more than a dead bird. Nothing to write home about. Seems Kat was spot on with the pebble remark. The Rock beat his chest with his fists, causing a spray of that baby oil to get in the eyes of the front row spectators. Having that all over his body, surely was a fire hazard. 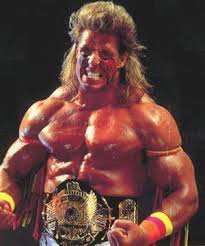 The Rock was finally ready, and pointed at Sayaka.

“Going to break that sword, and throw you over my shoulder to have for later, after I get my money!” Cocky son of a bitch.
The Rock started a run at the Princess of Wrath and his right hand shot out to try and seize the handle of the sword, to wrestle it from Sayaka’s grip.

Watching up on the bar, Katrina put her hand over her eyes, but peeked between the break in her fingers.

“I can’t watch…but the suspense is killing me.”