Rise of the Horsemen.

Quote: “Disease gets a bad rap, don’t you think? For being filthy. Chaotic. Uh, but, really, that just describes people who get sick. Disease itself… Very…Pure…Single-minded. Bacteria have one purpose –divide and conquer. That’s why, in the end…It always wins.” 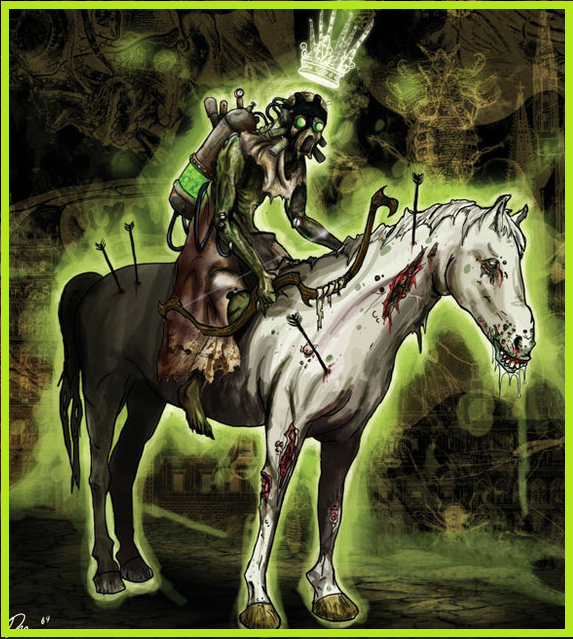 Personality:Pestilence has a strong relationship with his brothers, and little or no regard for mortals. Pestilence, also known as the Green Horseman or Sneezy, is an extremely powerful entity and is also one of the Four Horsemen of the Apocalypse, embodying illness and irritation amongst humans. Pestilence is affiliated with his brothers Famine,War and Death.

Weapon(s): Pestilence’s ring is solid silver with a sickly green gem in the center. His battle horse

•Powers: Being the personification of the concept of sickness, Pestilence is very powerful, and immortal as a Horseman. Like his brothers, he requires his ring to help him focus his powers. A testament of his power was when he shouted on a supernatural level at his demon servant, and she was completely terrified. He was also unafraid to defy Lucifer’s will.

• Biokinesis – Pestilence can create, manipulate, and control diseases, plagues, infestations, molds, and other ailments. He can also cause instantaneous illness in another being. Pestilence possesses dominion over ailments. His sickness powers don’t work on angels.
• Indestructibility – Pestilence himself, as a Horseman, cannot be physically destroyed. Pestilence, like the other riders, requires a ring that channels his essential core abilities.
• Immortality – Pestilence is not subjected to age and disease.
• Teleportation – Pestilence can go anywhere he chooses in the universe.
• Cosmic Awareness – As a horseman, Pestilence possesses an incredible amount of knowledge and understanding of the universe and its workings, although his knowledge is vastly inferior to Death’s. He can understand concepts, such as the Apocalypse and nature of sickness.
• Electromagnetic Interference – As a result of being on camera, his face and ring were masked by static.
• Super stamina – Pestilence requires nothing to keep him going.
• Invisibility – As a Horseman, Pestilence is naturally invisible and can only be seen if he wants others to see him.
• Supernatural Perception – Pestilence could tell if a demon was occupying a body, with a look.
• Telekinesis – Pestilence could move objects with his mind.

Weaknesses: Though literally, nothing in existence can kill or destroy Pestilence if his attribute still exists, he has some weaknesses.
• Ring Removal – Without his ring, his corporeal form loses all its powers, except for teleportation.
• Physical objects – Anything serrated or jagged, or for that matter anything that can be implemented into a weapon, that can be used to pierce can inflict pain upon Pestilence’s physical form. His physical body can be pierced and penetrated identically to how humans sustain infliction though physical wound cannot kill him.
• God – It is implied God’s power exceeds that of Pestilence.
• Death’s scythe – Nothing can kill Pestilence except Death’s scythe.

Personality: Something of a loner, Sammy or “Sam” to those that she allows to get close to her, is a model student, who can usually be found out on the grounds as opposed to being cooped up in the library or dorm. Her affinity with the outdoors is due to when she came to understand and accept her ability or talent with the element of air. Sam is not the kind of girl to be the centre of attention, and keeps her thoughts to herself if there is a conversation going on. You could say that she has yet to find a kindred spirit amongst her peers. Sammy has trust issues that stem from her younger years, though if one were to break through, she would be a loyal and good friend.

Strengths:Her abilities to harness the weather by her use of controlling oxygen and nitrogen that is forced together by the earth’s own gravity, makes her a worthy and somewhat destructive opponent in any battle. Her understanding of her environment and the spot on timing of when the air density changes; allow her to maximize her power.

Weaknesses:Sammy is weakened by those that use the fire ability as it draws the oxygen from her environment. Those that use electricity against her can alter the molecules in the air with electrons, thus overwhelming her.
Appearance:

History: A girl with a mysterious past, who had changed schools many times in her youth. Few ever got to see the real Sammy, for she kept that hidden behind a nerdy facade. Her winter white hair was usually kept up in a tight ponytail that drew her hair back so tight that it made her look severe. With large black rimmed glasses, and wearing clothes that were often two sizes too big, she tried to be invisible to others and would often duck away outside with her favourite novel to a place out on the grounds where few would go. Preferring ravens as company than people, when she was hidden from view, she would release her hair from its confines and use her powers in secret – the only tell tale sign was when the leaves from the very trees above her were whipped up into great clouds before settling down to fall over her in a magical spectacle. The only time she smiled.