Released in 1982, this song was the Clash’s highest ranked song in the charts, from the Album – Combat Rock.  The theme however, while it is 33 years old, still stands true in the Middle East.    The clip was filmed in Austin,  Texas and while this might seem to be politically incorrect by today’s standards, it illustrated a powerful message.

The United States Airforce became an unwitting participant in the video. Two RF – 4C aircraft landing at Bergstrom Air force base (near Austin) from the east are featured in the portion of the video with the lyrics “the King called out his jetfighters…” 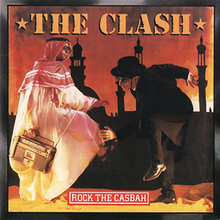 Now over at the temple
Oh! They really pack ’em in
The in crowd say it’s cool
To dig this chanting thing
But as the wind changed direction
The temple band took five
The crowd caught a wiff
Of that crazy Casbah jive

He thinks it’s not kosher
Fundamentally he can’t take it.
You know he really hates it.

Australian politics has been pretty pathetic in the past couple of weeks.  With both parties losing support over a range of issues, you reach a point where you start to wonder, just who the hell do you vote for in the next election.

While the Libs really are getting my goat with their censorship of the front bench, the delaying of a same sex marriage referendum, and the woeful carbon emission target projections, their attempts to change laws that prohibit environmental protection groups from taking corporations to court over damage to our environment; labor just don’t seem to be giving any reason to vote for them, since they are so caught up in the whole Trade unions royal commission hearings.

There really is only two alternatives if you are thinking of voting for someone other than the two main parties.  An independent….or…the Greens.  Sad to say, I don’t fancy the Greens either.

This video sums up how a few might be voting, come the elections next year.