The Dark Moon of Terakus. 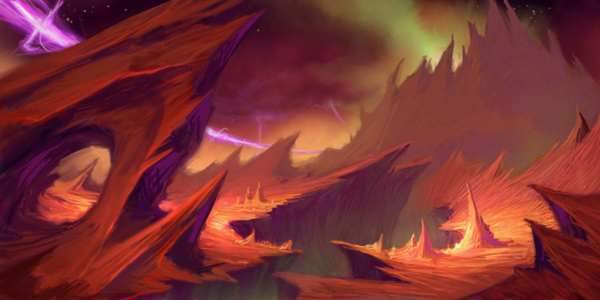 To everything there is the opposite. Just as Alteria exists so to does it’s counterpart. The ying to the yang. Terakus. Planet of all chaos and ruled by the Destructor – Gizora, who has been in slumber within the mountains of Hellrise. Whilst the cities that dot the moon are filled with the dark creatures and vile lords of the underworld, a thriving metropolis does exist. Though considered to be a moon, by those on Alteria; they are unaware of the dangers that lurk on the dark side of the moon.

The Dark Moon of Terakus

Since the dawn of time there have been two that wielded such powers that it was enough to bring about the rise of greatness and the fall of planets and civilizations. Just as there was the will of Good, there was the opposite, the Chaos of Destruction. Creation had it’s name, and so reigned over the planet of Alteria along with the Celestial Kings – but in the days coming, their counterparts…the opposites were preparing for the awakening of their great Anti God. The Destructor….Gizora. Said to be in slumber in the mountains of Hellrise, till the alignment of the three suns, the dark sons were to build for him that would be worthy of his throne. Across the fire moon, there were plates that cooled and allowed for the construction of vast cities and territories where those of greed and lust could build towering monuments and buildings that all bore the crest of their leader. It would not be an easy task to awaken the Destroyer. Sacrifices and rituals had to be held and all the right relics brought in from across the surface of Terakus at exactly the right moment. It had been written by scribes and seers had foreseen the day in which the crypt would crack open and reveal the Ruler of Terakus in all his chaotic glory.

A line of robed men in crimson carried with them the sacrifices that were in boxes, cages and on the back of trucks. Creatures that had been harvested in accordance with the blood parchment of Cardis. Guardians atop of muscular steeds cracked their whips to the lowest of Terakus’s drones – sightless zombified behemoths, that pulled the caged carts as the procession was reaching the rise of the mountain of the sacred Crypt. In the sky above, you could see the three suns that were all close to being in alignment. The dark priests needed to hurry if they were to make the preparations before the time of the awakening. There was a sense of urgency now growing between both relic hunters and the priests.

Just ahead a large jagged opening was visible, forged out of the rock by the power of Gizora before his slumber. As the many vehicles and carriages passed under the arch, there was a change in temperature. The heat from the molten lava pits below was releasing plumes of noxious gasses that to mere mortals, would have them clamoring for breathing apparatus. Within the cavern like chamber, which was the size of an Olympic stadium, there was a mount that had four pillars, with the top being like the roof from the Greek Parthenon. At the very top of the roof of the cave was a large hole, that allowed for the viewing of the sky – which was important to the ritual itself. The sound of brakes and hydraulics now echoed throughout the chamber, as well as shouts from the guardians, as the great drones lowered their ropes and chains to bring the procession of cages and boxes to a halt. Screams, whimpers and cries came from within the sacrifices carriages, and the guardians walked along the sides, shoving great electrified prodders in to keep them quiet. Not exactly a humane way of doing things, but this was Terakus.

At the base of the mount, the crimson robed clerics and priests assembled, and started to give out orders on where the sacrifices were to be chained and mounted for the ceremony. It was like a cattle call, as the cages were unlocked – chains falling to the ground, while collared creatures of all descriptions were led out and brought to the various points of the four pillars. Large hammers were used to nail the creatures chains in place. There was to be no happy ending for them. Their blood and life force were needed to crack open the seal on Grizora’s chamber. A large stone door with ancient script that was chiseled into the rock was the center point of the cavern.

Large torches that were carried by the bearers formed a ring around the outside of the pillared mount, and a lone robed dark one moved to a special podium with a book that had been fashioned out of human skin. He placed the book down on the raised stand and then slowly drew back his hood, to reveal a shock of black hair. Grizora’s most dedicated of followers. His face was etched with tattoo like marking, that burned red compared to the darkness of his skin. At the wave of his hand, the relic hunters approached the mount steps, each carrying a piece to what was a puzzle, marked out by matching holes within the crypt itself. On Barax’s drop of the finger, all four climbed the steps and then pressed the relics into the stone marks. Each one hissed and steam poured out along with a blazing orange blast of light. The torch bearers all then looked to the sky as the three suns were just about touching. The time had come.

The chamber started to groan and creak, as many spectators were now waiting in anticipation of this momentous event. A chorus of voices began to chant, some even going into a hypnotic state, with the faces of the unfortunate sacrifices now contorted in polarized fear. The voices were now raising – beating drums played loudly as the suns started to cross each other. Once they were aligned a blinding light erupted from the sky, and rocketed down to the hole of the chamber, flooding into the room as the last words were being said by the dark robed priests. Each relic, each sacrifice were hit with beams of golden fire light. Hot as the sun, as the marking upon the door to the chamber of the Destroyer lit up, each mark glowing one by one as the voices within the chamber reached a crescendo. With a loud explosion, the door to the Destructor’s chamber was blown to bits and within you could see the very fire of Hell itself come to Terakus, as a figure was fashioned from the flames within. But to the surprise of all around, the figure was not that of a great beast…..nor was it…male.

It was a woman. The Destructor was the opposite to those on the Shattered planet.

Many of the priests all stepped back, as she emerged from the flames – naked. Her skin cooling rapidly as her well endowed form was viewed by all those that had awoken her. The men gasped at the magnificence of her being. It was only when she had taken a step off the mount that Gizora spoke.

“What are you all looking at?” The voice having a very deep and sexy allure. Hearing herself, Gizora stopped and looked down. Were there breasts on her chest? Reaching up with a well manicured hand she gave one a squeeze and then roared with laughter.

“Okay…is this some sort of joke?’

Funny thing was….no one was laughing. You could barely hear a pin drop, except for the odd sound of rustling under a priest’s robes.

“No, my Lord Destructor. Tis no joke.” Her long time assistant said. Grizora was still fondling her breast and then poking the other one. “Well with these puppies, I’m not going to get bored.'” She laughed again, and then cast an eye on one priest who was very active with his hand under his robe. Clearly enjoying seeing Grizora like this. The Destructor didn’t even bat an eyelid as she snapped her finger, and the priest’s cock fell off in his hand. Shrieking and with blood running down his leg, he ran from the mount, much to Grizora’s amusement.

“Well well…I imagine that I missed a lot. Time to….fill me in.”

– One of the hooded men would slowly walk forward and drew his hood back , revealing a average heighted male who had quite the perplexed expression on his face ; his wide eyes gazing the female up and down as if in disbelief and his bright white hair hopefully distracting the males expression to excuse him for a proper emotion to be shown at this point in time. But soon his confusion came to an end as he would lower his head and yell his next words quite loudly and quickly –

” My name is Charlie , a loyal servant of Lord Gizora and of course I’m under your command to do your dirty work and other accompanying orders. Also…”

– Charlie would take a few more steps forward , while the other robed men had watched in disbelief that he had gotten so close and would take his hand and cupped her left breast with his hand before making a alarmed sound –

”Aha ! These are real ! But, You are our great and feared Lord so you must cover up otherwise the rest of the men will get ideas. So please take this.”

– He took a few steps back and took his robe off and gave it to her to cover up , as a Anti-God Gizora would easily pinpoint how many of them were looking at her lustfully and Charlie was actually touching to validate her gender and nothing further even though it seemed quite the perverse action, he had always heard of how Gizora was supposedly a male and didn’t want to tarnish the concept and has taken into consideration now that things aren’t the same. Protecting and conserving the Destroyer’s appearance and person is his task now. –